We put together a quick graph of short term interest rates and the market’s expectations of future rates.  The current LIBOR curve as measured by the LIBOR Futures market predicts rates to rise to between 1.09% and 1.95% from December 2015 to September 2016 (Charted as the blue shaded line below).  We then assumed that the Federal Reserve would begin to raise the Fed Funds rate in March 2015 and do so in 25bps increments at each subsequent FOMC meeting (The expected Fed Funds using that scenario is plotted in Red).   Historically, LIBOR trades at a spread to Fed Funds (approximately 50bps).  We then derived an expected LIBOR curve based upon the expected Fed Funds rate (Charted as the green line).  This shows that the LIBOR Futures market is currently under-estimating the rate rise even under a very gradual FOMC path. 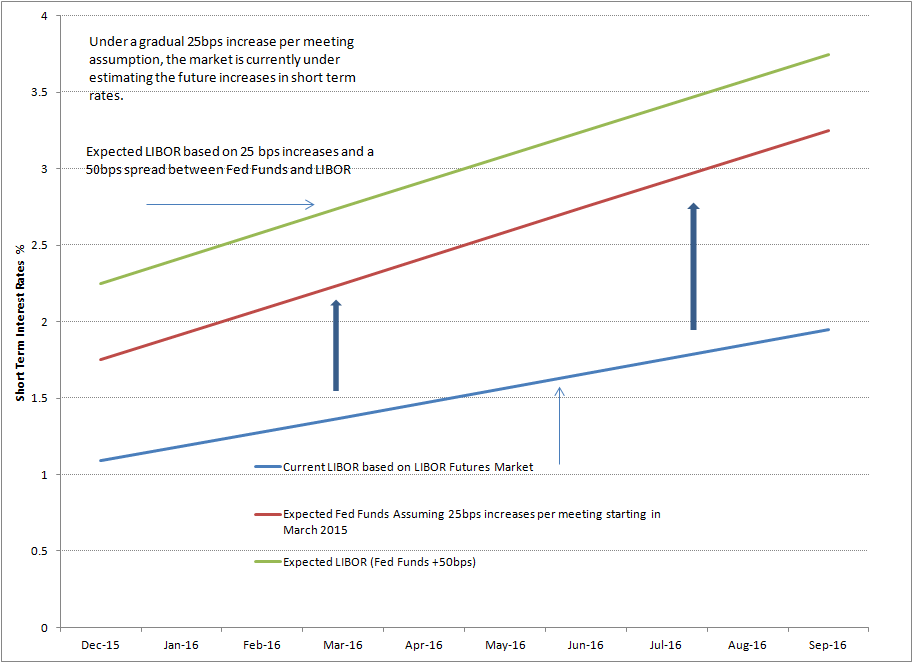 The bond market staged a strong rally in the liquidity-starved month of August as professional traders and arbitrageurs squeezed shorts, pushing bond prices higher and the yield curve flatter.  The rally came despite continued economic strength and was accomplished in conjunction with a rally in equity prices.  Typically, bond and stock prices move in the opposite direction, but in August, the yield-to-maturity of the 30-year Treasury bond fell 24 basis points while the S&P 500 generated a total return of 1.92%.

While trading activity in the investment grade bond market was rather pedestrian during August, the high yield market suffered through a mini-crisis.  The sometimes nasty risk reward relationship present in the search for yield in a zero interest rate world was evident in the Junk bond market during the last week of July and the first week of August.  The outflows began in June with a modest $1 billion outflow followed by a more material outflow of $5 Billion in July, and the exodus intensified during first four trading days of August, with redemptions totaling more than $7 Billion.  The catalyst could be blamed on geopolitical factors, including the ongoing wars in various parts of the world, and/or the ongoing economic weakness in Europe.  However, just as likely, the motivation was investors locking in profit.  In this low-volatility, Fed-engineered market, investors are easily lulled into the comfort of the status quo and to intrepidly add risk in search of yield.  That state of bliss is occasionally disrupted by the sobering realization that with more yield comes more risk.  At the end of the day, the junk bond market had just gotten too expensive and when investors attempted to sell, the street was in no mood to buy.  What started as a price weakness quickly devolved into a rout.  Since bottoming in early August and retracing 75% of the move, junk bond prices are now trading at the mid-point between the recent high and recent low, with the nervous retail investor eyeing the exit and opportunistic institutional investors hoping the market holds.  While we like a select number of high yield names, we think the category is expensive and vulnerable to lack of liquidity “herd” selling that was witnessed mid-summer.

At the time of this writing, the Employment report for August has just been released and the results were marginally disappointing, registering a net gain of 142,000.  While below the 12-month moving average of 206,000, the job gain was enough to lower the unemployment rate to a cycle low of 6.1%.  It’s been a monthly routine for economists to downplay the robust employment reports witnessed over the last year, namely because the labor force participation rate has fallen from approximately 66% of the population prior to the crisis to 62.8% as of last month.  Pundits have pointed to the lower participation rate as evidence that the economy has not fully “healed” and that the Fed should continue with their extraordinary easing measures.  That opinion was refuted this week by the Federal Reserve Bank of Cleveland’s research department in a paper titled “Labor Force Participation: Recent Developments and Future Prospects.” In it they present the case that the fall in participation is attributable to the aging baby boomers leaving the workforce.  Moreover, the paper argues that the participation rate is likely to fall even as the economy continues to grow, as the younger boomers join their older cohorts in retirement.  If the research is correct, a worker bottleneck may be closer than the FOMC has handicapped.  If so, we could be on the verge of a corresponding pick up in wage growth.  Such a pickup is already underway in the construction and home improvement industries.

“The demand for bonds has been so great in recent years that people have looked beyond the credit rating as they just want yield – any type of yield,” says Michael Kastner of Halyard Asset Management.